Well, who knew I'd be writing this while listening to Grease Lightning. Haha nothing better than a good old throwback. Anyways I'm excited to continue my Interrail adventure series with one of the last cities - beautiful Rome, capital of Italy and tourist centre ;) When we got there we had thunderstorms and overly humid days, which made exploring difficult and sadly some of my photos unusable. Fogged up pictures where I look barely alive just aren't that attractive. I still have tons tho hence I split this post into two parts so you guys don't have an essay to read. So this is part 1:

We reached Rome by train from Florence in the afternoon and checked into our cute little B&B. Vatican was on the radar for the evening and it was absolutely stunning! We were warned several times that it would take ages to get into St Peters Basilica but we were sorted within half an hour which was a pleasant surprise. Definitely go inside, but remember to cover your legs and shoulders otherwise you'll queue up for hours and end up not getting in. We also bought tickets to go up into the Dome and on top of the roof which was amazing. You could literally see Rome from above, and even though the stairs to the top were a nightmare it was totally worth it. 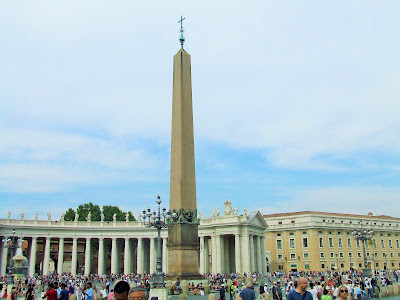 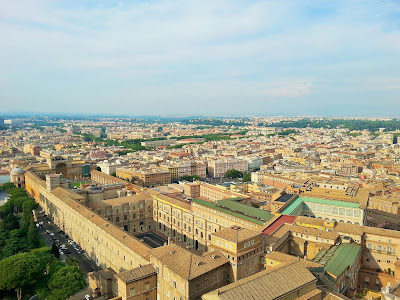 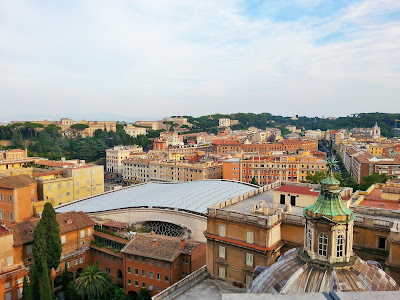 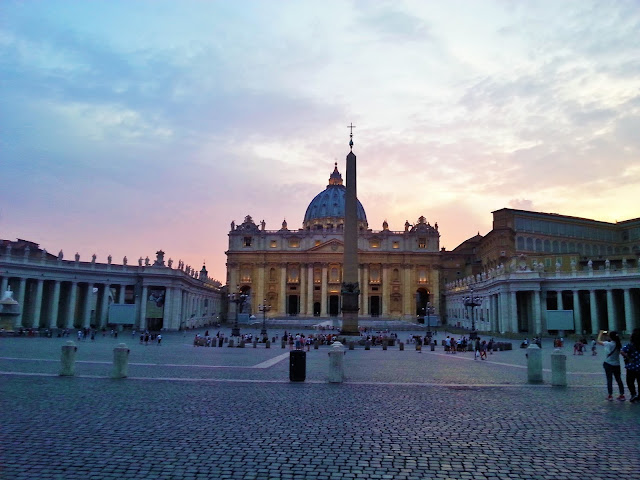 We ended the day with a delicious seafood risotto and a beautiful sunset. Perfection!

The next day started with a visit to one of the stunning basilicas (no photos allowed) and then a walk around Rome's streets. It had stormed earlier that day so the sky was looking pretty cool and we found the building where the Pope holds his meetings when not in the Vatican. Pretty impressive plaza if you ask me (which he probably won't).. 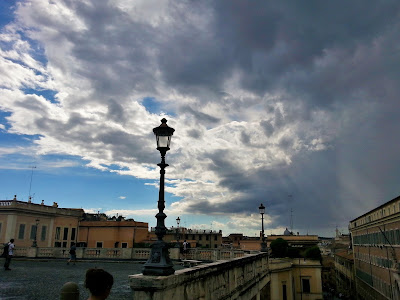 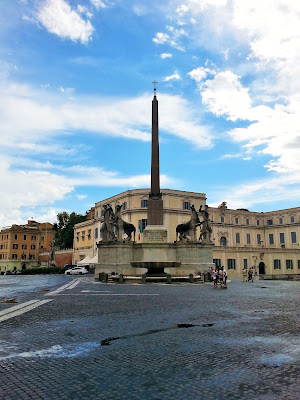 A fact is that I was really looking froward to seeing the famous Trevi fountain... However Rome decided that exactly when we were there the fountain had to be touched up and basically all you could see was absolutely nothing. No I'm not sulking, what you on about?


Let's move on swiftly as we went to discover the Spanish Steps. They're basically a lot of steps that look really cool and attract a hell of a lot of people. Oh AND it was raining so everyone was fighting for their umbrella space.


To tell you the truth we weren't quite so sure why the Spanish steps were famous from the bottom but the view from the top explains it. Though someone still needs to explain the Spanish part to me! 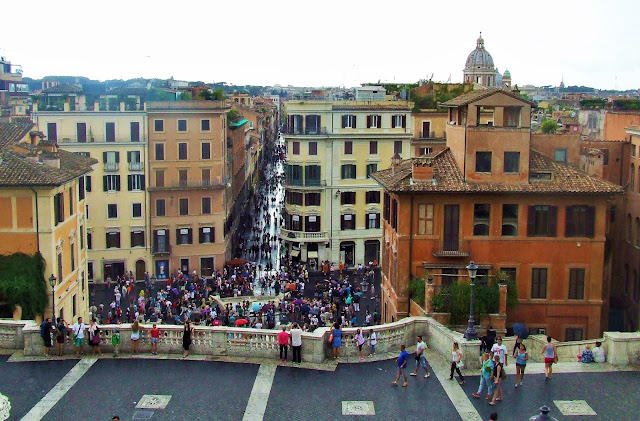 After that we WALKED all the way towards the Piazza del Popolo which was quite a journey but Rome is worth the pain. Like I found this super cute mini-apple tree which made my day - sad but true, ask my sister. 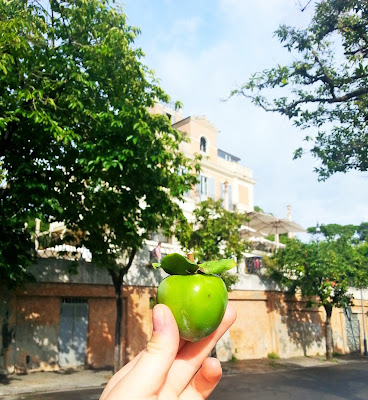 And so much greenery! Like it honestly felt like we were in some kind of jungle. Oh and not to mention the views! We were on a road that ran along a hill so we kept having the most amazing views of Rome. 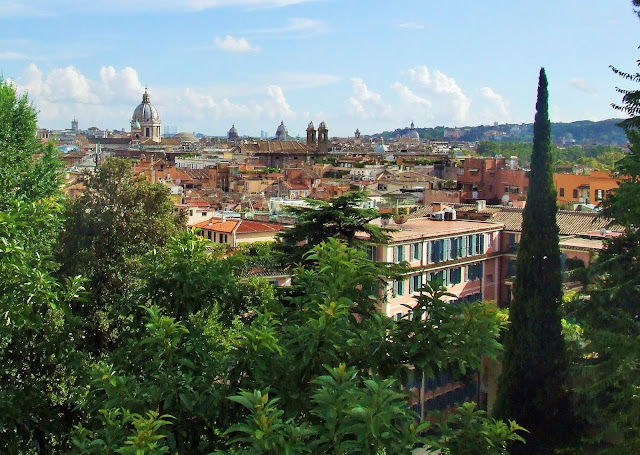 Aaaand finally the best views of Rome from the beautiful Piazza del Popolo which has a massive park right next to it and all on top of a hill. Kinda felt like a movie with little tricycles and someone playing the violin and SO MANY TREES! 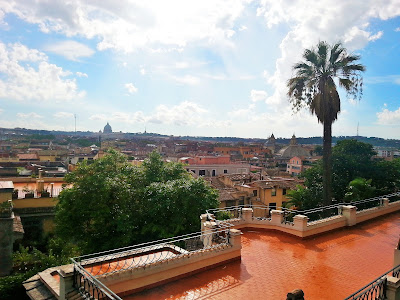 Ready for the piazza? 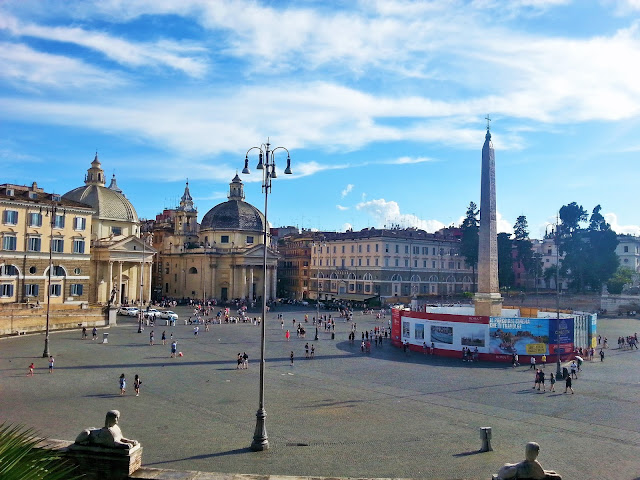 Walking back towards the centre along the river while the sun was setting was a very zen moment. Although I think it was kind of ruined by our feet feeling like a car had rolled over them. Oh well, it will only make us stronger won't it?


Last stop was the Piazza Navona, main piazza in Rome and centre of the (family-friendly) nightlife. Street artists absolutely everywhere, many of them making me feel very bad about myself. I mean, why can they ALL draw so amazing? Not fair :D

Well this is the end of the first part of my Rome story, next up is the day we did the Colosseum and Roman Forum. Trust me, it's worth a blog post of its own. I also wanted to address the fact that tons of people warned us before going to Rome that it would be very dangerous and we should always watch our stuff and not let us get separated. We followed everyone's advice and NOTHING happened. No one even tried anything and people were really lovely. Now, we could just have been lucky, as when we were around there was lots of police everywhere as well. However my point is don't let other people's horror stories put you off travelling somewhere. Take them serious and act on them but don't let that stop you from having the best time ever. Because you will have a blast!

Also I am going to NY in two days (which I will write a post about) so my next post might be a while off, I'm really sorry. Here are links to all of my previous interrail adventures tho, so you don't get too bored ;)