City number 3: Berlin! Can you believe I've grown up in Germany and not once been to Berlin? It was so great coming back to Germany and discovering its capital along with its history and sights. We stayed 3 nights in Berlin in a hotel, which was by far the fanciest of the trip (and still wasn't any more expensive than the one in Amsterdam..). History is around every corner in Berlin, which makes the city so special and enticing.

Our hotel was situated a five minute walk from Potzdamer Platz so we there went first. Germany has by far the best Pretzels ever, hence that was our breakfast almost every day. Berlin also had amazing sandwiches ;). Anyway the Potzdamer Platz was pretty cool with it's modern buildings and skyscrapers. However it also had some pieces of the Berlin Wall on display, which were covered in TONS of gum.You literally couldn't even really see the wall anymore.

Next we went to the Holocaust Mahnmal for the murdered Jews. It was pretty intimidating and fascinating, the artist has really created an impressive memorial.

Afterwards we visited the Bundestag, even though we didn't go inside that day, due to the booking service being messed up. It's a pretty impressive building, however we could only access one side of it due to construction workings going on.


Right next to it starts the Tiergarten, which is a massive park right in the centre of Berlin. Situated inside it is for example the Carillon, which is a tall tower next to the House of World Cultures that functions as a manually played concert instrument. Pretty strange. The House of World Cultures is one of the most beautiful and unique buildings in Berlin which is used as a concert hall, but sadly it was under construction when we were there.

We then went back along the river Spree to the German Chancellery. At that point the temperature had reached well over 35 degrees and we were desperate for something cooling. So, since there are water fountains near the German Chancellery, it just seemed right to play in them like the 5 year old kids next to us and get soaked. So worth it.
Guess where we walked after? THE BRANDENBURG GATE. I was soo excited to finally see it myself, and it's as cool as it looks in pictures. Only downside was that the place was packed with people, so it was hard to take photos in front of it.
After we went along Friedrichsstrasse, a really posh shopping street with the coolest shops. We finished the day off by going past the Berlin Konzerthaus, a famous concert hall, to the Gendarmenmarkt. It is a famous square in central Berlin, where you can find said Konzerthaus as well as the French and German Cathedrals. In the beginning it used to be a market place, hence its name. 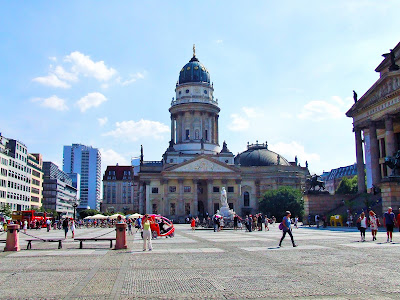 The day ended with a lovely meal of Doner Kebab, because that's a must-eat in Berlin. By the way if I can give you one tip about Berlin: Get a train ticket for the day! You will thank me and not walk barefoot because of your hurting feet in the end... (we sure did). 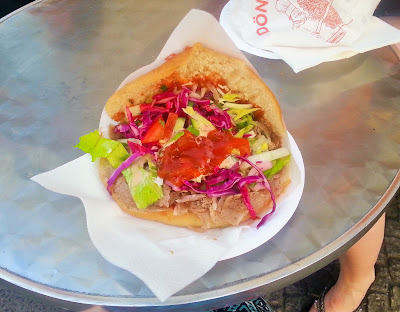 We started the next day off with a trip to the Berlin Cathedral and the Museum Island. The Berlin Cathedral really is beautiful and a place for people of all cultures to hang out. There was street music and dancing and everyone was just chilling in the blazing sun.

Due to the extreme heat we went into the Berlin History Museum which, first of all, had air conditioning but also really taught me a lot about Germany's past. There were tons of extra exhibitions going on as well. Next we walked to Checkpoint Charlie, the best-known Berlin Wall crossing point between East Berlin and West Berlin, during the Cold War. To be honest I had imagined it more impressive, but I guess the Mac Donalds right next to it kind of killed the historical vibe.

Then at last we FINALLY managed to get a place to go up the Reichstag and see its dome. It was a hassle as only the online booking was working and that not even properly. However it was definitely the highlight of Berlin. Our visiting time was during the golden hour, the sinking sun made it like 20x more beautiful. They have amazing auto guides there too and I absolutely loved it! 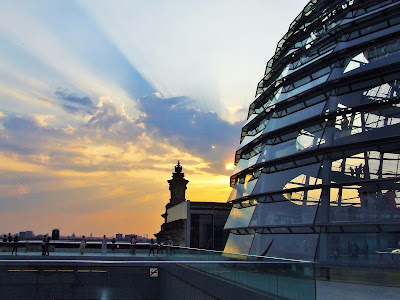 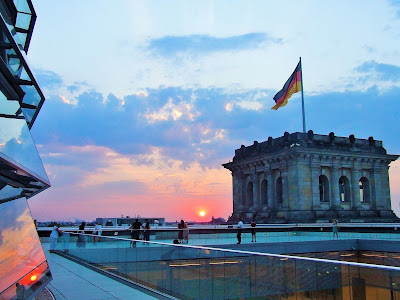 That was the end of our amazing second day in Berlin, after that we had typical German dinner - Kaesespatzen which is kind of like Mac n Cheese but not really (and this is why I'm not a food blogger).

On our last morning we visited the Documentation Centre of the Berlin Wall, where you can see original standing bits of it as well as read about the stories of people who tried to flee. Many tragically died and it was a very emotional visit, but definitely a must-see!


After that we took the train to the Kurfuerstendamm, Berlin's most expensive and famous shopping street and walked through the KaDeWe, which is short for Kaufhaus des Westens. It's a big, posh department store that you have to have seen.
In the end we had to hurry to catch our train to our birth city, Munich. We stayed there one day to visit our grandparents and recharge our batteries (metaphorical).

I hope you enjoyed this very long blogpost and made it to the end. Berlin is SO beautiful and exciting, if you haven't seen it you should put it on your list of places to visit. Now the Italy posts will be coming up, which I am soooo excited to share with you. Spoiler: I will tell you where to find the best ice cream in Italy ;) Stay tuned!